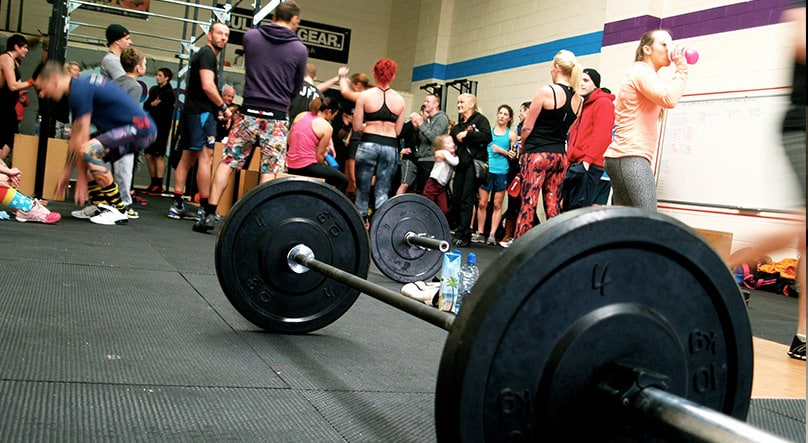 Bad habits are a counter-productive pain in the ass. In CrossFit, they can affect our efficiency, our performance in a workout and even our overall results and experience in the sport. Perhaps the most annoying thing about bad habits is acknowledging that you have one (or more) in the first place. People are often oblivious to them unless they are made aware of their negative tendencies. We probably all have bad habits when it comes to movement mechanics and other aspects of CrossFit—such as bending the arms too early in the snatch or neglecting to keep track of scores. Every athlete probably has a catalog of bad habits in this regard, and to go through them all would transform this piece into a novel instead of an online article. As such, we want to discuss the bad habits that are commonly displayed in the WOD that you can identify and change sooner rather than later. Some of them may seem like small, inconsequential things, but you can never underestimate the impact one positive change (regardless of its size) can have.

UNNECESSARY BREAKS
This is probably the greatest calamity that is present in almost every box on the planet, and one that befalls even the most diligent and dedicated CrossFitter. Ok, we all feel tired at some point during a workout, so a break now and again is inevitable, lest you find yourself redlining early and having to drag yourself over the finish line. If we didn’t take breaks in a workout (depending on the workout, of course), we would be putting ourselves at risk of injury or worse.

The problem and bad habit starts when athletes begin to take breaks when they don’t really need to, and unintentionally disguise it as something else. Walking over to chalk up, drink some water, tie your shoelace, re-adjust your wrist wraps, fix your hair—these are all signs that while you think you may be doing something that’s going to help your performance, the reality is you’re actually taking an extended break. Now don’t get me wrong, I love to chalk up as much as the next athlete, and sometimes it can be vital in advance of a shit-ton of pull-ups or something similar. But have an honest conversation with yourself—do you really need to walk over to the chalk bucket, grab your water bottle, or untie and tie your shoes in the midst of the WOD as often as you currently do?

This is a nasty habit to break, but if you remind yourself before the workout that it costs you time, you may start to find yourself relying on these ‘mini breaks’ less and less.

INAPPROPRIATE SCALING
The ‘RX’ and ‘Scaled’ options are listed on the whiteboard as guidelines to follow, but that doesn’t mean those are the only options. But I don’t think I’m alone in saying that every box has an athlete that insists on going heavy when they absolutely shouldn’t or scaling down when they don’t really need to. For the most part, the latter option creates the problem. All too often athletes feel that they need to go light in order to effectively complete the workout ‘in a fast time’. Of course you’re going to move faster if the weight is lighter, but that doesn’t necessarily mean that you’ll be getting any better! The body needs to be placed under constantly varying stressors in order to grow and adapt, and resistance (i.e. weight) is one of them. Yes, you might have to break reps up by singles whereas you were previously able to knock out triples, but it’s the only way you’re going to get stronger! When asked about workout strategies for Grace (30 clean&jerks for time 95/135lbs), two-time CrossFit Games champion Annie Thorisdottir had this to say:

“My best time in Grace is 1:27, and I believe that if you have a time under 1:40 it doesn’t make sense to keep trying to do the workout faster, otherwise your form will go out the window in pursuit of a quicker time. Instead you should just try to add more weight to the bar.”

Only you know when you’re ready to scale up or down, but don’t make the mistake of constantly making things too easy for yourself!

INAPPROPRIATE PACING
It’s crucial to tailor your pace to the demands of the workout, otherwise you’ll find yourself finishing the WOD with a score that is simply not an accurate reflection of your ability and level of fitness. For example, this past weekend I let my adrenaline get the better of me and shot out of the starting blocks like a bull on ‘roids. The problem was that the WOD was a 25-minute AMRAP, so by the start of the second round my quick start had caught up to me and I was screwed. When the 25th minute finally arrived, I was completely broken—and had been for some time. For longer workouts, there’s little to no logic to going 100 miles per hour right from the get go. You want to maintain a solid pace that you can hold for the majority of the workout while still leaving some gas in the tank for a big finish.

Which brings me to the flip side of this bad habit—athletes coasting it before realizing the workout is about to end and stepping it up a notch. One of the worst feelings you can have in CrossFit (aside from the misery of doing Fran) is finishing a workout and realizing that you could have pushed yourself harder and given more. It almost feels like you wasted your time, and you almost immediately regret your pacing strategy. Well, all I can say is ‘trial and error, my friends.’ At least now you know what your baseline level is, and you can attack the next workout with increasing levels of intensity.

Inappropriate pacing also applies to the strength portion of your CrossFit class, though perhaps a better title to explain this bad habit is poor calculating. When you have X sets to find your X rep max, you want to make sure that you’re starting at the right weight and making the right jumps in weight from set to set. You don’t want to complete your final set and realize that you could have gone much heavier, nor do you want to start off too light and be completely spent before attempting your last rep(s). Such calculations are tricky to master, but you can always ask your coach for advice on how to move upwards from set to set and learn from your experience as well.

NOT USING THE RIGHT GEAR
How annoying is it to hear athletes complain about their inability to execute squats effectively, and then witness them trying to do overhead squats in tennis shoes? Just as you should dress for the occasion, there are tools at your disposal that can give you a healthy advantage going into any given workout. Minimalist or weightlifting shoes to help you sit back on your heels and move from double-unders to cleans seamlessly. Wrist wraps to take the stress of your wrist joint during front squats. Shin sleeves or high socks to avoid cuts and bruises during box jumps. I’d wager there’s a link between athletes that are progressing slowly (or not at all) and the gear they are wearing—or more likely, not wearing.  There’s never a substitute for hard work, and no piece of gear can match the amount of effort a committed athlete is willing to put in. But what it can do is make your life a little bit easier, so that the effort you do put in can go towards the workout itself, and not towards compensating for the lack of gear in the first place.