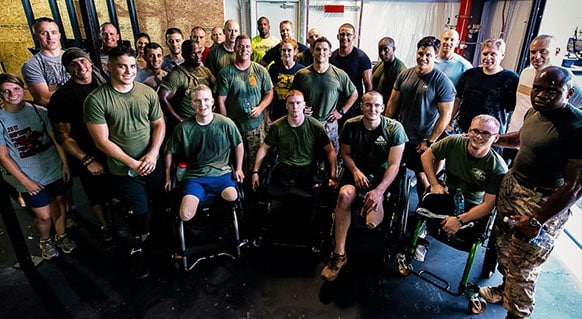 CrossFit is about being ‘ready for anything’: 7 minutes of burpees, 30 snatches for time, a triathlon at Camp Pendleton – anything! In this regard, CrossFit Walter Reed is no different. What makes Walter Reed unique is that this box caters to Wounded Warriors. At this box, on any given day, a double leg amputee might walk into the box and find burpees programmed into the workout. Whether he thinks he can or he can’t, he’s probably right!

In January of 2008, Special Forces Communications Sergeant Dillan Behr was introduced to CrossFit while deployed in Afghanistan. “I was always in shape due to being Special Forces but I never really loved being in shape. After CrossFit, I kinda found that,” says Behr. The role CrossFit would play in Dillan’s life in the coming months would be instrumental.

In April of 2008, Dillan was shot through the hip and immediately medically evacuated to Walter Reed National Military Medical Center in Bethesda, Maryland. After six months, he got his hip replaced and was set on returning to CrossFit as soon as possible. During his rehabilitation, Dillan would have regular sessions with the physical therapist then walk across the street to the ‘regular’ gym and do CrossFit. “It struck me how I could still do CrossFit even with an injury. I started thinking, ‘If I could do this, other wounded warriors could as well.’ I thought it would be a great idea to get a CrossFit in Walter Reed.”

The first group of crossfitters at Walter Reed worked out outside or in the back of the regular base gym. Brian Wilson, owner and head coach at CrossFit Potomac (and now a coach at CF Walter Reed) would let them borrow equipment as they needed. Eventually the ‘box’ would make the move to the cardio room inside the globo gym. It was a challenge to say the least. Equipment constantly had to be moved out of the cardio room to make room for other classes. Because they were onyy given an hour a week to use it, it was difficult to garner more interest in the class.

While all this was happening, Jimi Letchford from CrossFit HQ was working with Dillan and CrossFit Walter Reed to build out a real CrossFit facility at the base. All they had to do was find a dedicated space and CrossFit HQ would set them up with everything they needed! The problem: there seemed to be no space available on the base. “We literally walked around looking at buildings asking, ‘Who owns this?’ We probably weren’t approaching the right people,” says Dillan.

Out of the blue, Dillan received a phone call from one of the Marines on base who happened to work in Facilities Management. It also happened that this particular Marine did CrossFit and stumbled onto the CrossFit Walter Reed website. “We have a warehouse at the edge of the base. Would you want to host your CrossFit there?” “That’s everything we had been hoping for,” says Dillan. It was the perfect space for a 20-person box. Walter Reed put up the walls and flooring and said, “OK, bring the equipment.”

Soon thereafter, Dillan met with Jimmy Letchford and Greg Glassman and supplied them with a list of all the equipment they needed. CrossFit HQ ordered everything from Rogue Fitness and had it shipped straight to the box. CrossFit Walter Reed was no longer a once a week class in a cardio room; it was now a legit box.

Today CrossFit Walter Reed is off to a great start. They consistently get about 20 people per class. Classes are open to Wounded Warriors and their spouses or caregivers and anyone on base who works as a medical professional (doctors, nurses, physical therapists, etc.). The box is run as a non-profit, so there are no membership fees. The coaches are volunteers –for now. The goal is to make the box sustainable. “The problem now is that if you want to have 5 classes a week, you need to have coaches. Right now our coaches are coaches and/or owners at other gyms. They don’t have the time to spend multiple days at Walter Reed” says Dillan. For now, the box holds two classes per week.

“Every amputee comes up with a different burpee that works for them.  Essentially, it’s getting down on the ground, rolling around and getting back up.”

CrossFit is designed to be scalable. Nonetheless, it can present special challenges for Wounded Warriors. Every person’s needs are different. About this, Dillan says, “The adaptations for an arm amputee and a below the knee amputee are very different. Some of them maybe did CrossFit before, but a lot didn’t. Even the ones that did it before have to figure out a way to do it now or modify it to something similar. For instance, for a double above the knee amputee to do a deadlift you can put them on a bench, give them a couple of dumbbells, have them keep their lower back tight, bend over and lift. Obviously it will be a different feel, not much of a hamstring workout but they can still feel the movement and get something out of it.

To support CrossFit Walter Reed log on to www.CrossFitWalterReed.com and purchase one (or all) of their affiliate shirts. 100% of the proceeds go directly to supporting the non-profit box.

From the October/November 2012 issue of BoxLife Magazine. Photo courtesy of CrossFit Walter Reed