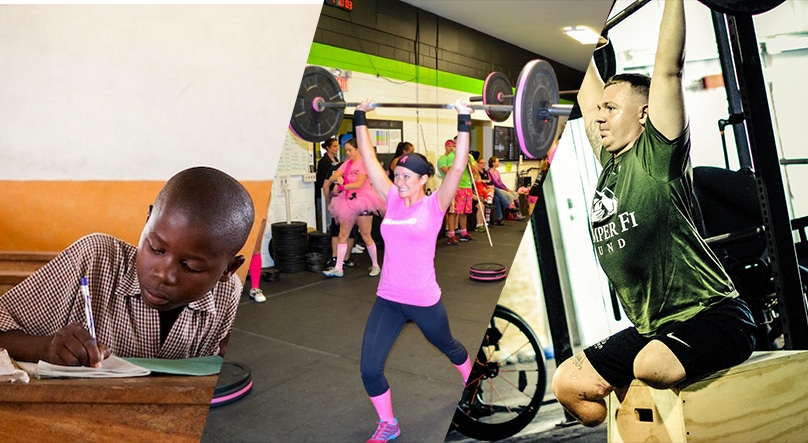 Though CrossFit is a young sport, its consistent growth in popularity, participation and exposure has led to an enormous community of like-minded athletes all over the world. And since this connection is so strong, and the people within it so proactive, the CrossFit community has proved to be the perfect breeding ground for philanthropic efforts. Philanthropy, is “the practice of giving money and time to help make life better for other people.”

As Nancy Choi noted in the Huffington Post, “The CrossFit community’s long record of philanthropy and community initiatives seems to be a natural outgrowth of the hands-off model that gives affiliates the freedom to identify needs within their communities and mobilize to make a difference.”

Indeed, CrossFitters are not tied down to the one box they are a member of—we are all part of the community, as expressed so vividly every year at the CrossFit Games. It’s a festival of fitness, fun, and an opportunity to meet new and interesting people from all over the world who have similar passions. This is why philanthropic efforts are so successful in our community, because even though we may not be directly affected by their cause(s), we know someone who is and we understand what it means to them—what it means to many athletes around the world. In a way, we are directly affected.

There is no better example of this then the memorial WOD’s and events that are organized to honor fallen members of the military, police force, fire service, and other first responders—and to raise money for charitable causes in their names. Every year on Memorial Day, athletes across the world perform the hero WOD “Murph”, a famous workout that is brutally tough on the mind and body, but created with the intention of recognizing the sacrifices of all active, retired and lost members of the military. On June 30, 2013, nineteen members of the Granite Mountain Hotshots firefighting team lost their lives while fighting a fire in Yarnell, Arizona. Many of them were members of Captain CrossFit, and once a memorial workout was organized to honor them and raise money to support their families, the CrossFit community rallied behind them. Thousands of people attended (and worked out) at the “Hotshots 19” memorial WOD on August 31st, 2013 (including Rich Froning and Chris Spealler), and the workout and event was repeated again this year in boxes all over the world. So far, more than $320,000 has been raised to support the families of the firefighters.

The efforts and impact of CrossFit Walter Reed provide another example of how the military and CrossFit are so closely linked. After two wounded veterans expressed an interest in CrossFit, co-founders Brian Wilson, owner of Patriot CrossFit, and Dillon Behr, a wounded veteran who employed CrossFit for his own rehabilitation, partnered together to launch the military non-profit affiliate in April 2012. As you might expect, the CrossFit community and CrossFit HQ supported them from the get-go. Coaches from other boxes volunteered their time to lead classes, and affiliates and HQ raised money to send them all the equipment they needed for their brand new box, which is located on the base at Walter Reed National Military Medical Center in Bethesda, Maryland.

CrossFit HQ reflects the active involvement in philanthropy within the community through their “fundraising arm”, CrossFit for Hope. The charity uses 100% of its donations to fighting childhood cancer, providing education in Kenya and other charitable ventures across the world. On June 9, 2012, thousands of CrossFitters nationwide participated in a CrossFit for Hope event in Washington, D.C. raising over $1.5 million for cancer research at St. Jude Children’s Research Hospital.

But there are also stories of “the average Joe CrossFitter” that has been hugely successful in their own philanthropic ventures, thanks in large part to the closely connected and supportive nature of the CrossFit world. In 2007, CrossFit trainer Steve Liberati launched the first Steve’s Club in Camden, NJ, using CrossFit as a platform for fitness and personal development of at-risk youth. Word spread quickly from box to box (as well as through the social media space that CrossFitters (and their initiatives) are heavily present on) and today, there are 18 clubs across the country, with the national program being funded through Steve’s Original Paleo Goods (and partly staffed by the kids themselves).

And with it being October, I would be remiss if I didn’t mention one of the most recognizable and successful philanthropic charities that has grown directly out of the CrossFit community. Barbells for Boobs (BFB) is a non-profit organization dedicated to the early detection of breast cancer, with an emphasis on men and women under the age of 40. The company was founded by CrossFit athlete Zionna Hanson after her friend Cecy Morales had sought screening services to test for irregularities in her breasts, only to be told by medical professionals to come back when she was 40. It was only after Cecy’s persistence that she was eventually screened to discover that she was in the midst of stage 0 (DCIS) breast cancer. But for “Z”, as she is known by her friends, these answers were nowhere near satisfactory, and she decided to make it her life’s mission to make sure that this scenario wouldn’t happen again, giving birth to Barbells for Boobs.

As you may already know, BFB is heavily involved in the CrossFit community, as

they are sponsored by Reebok and have a team of pro advocates that include familiar names like Aja Barto, Amanda Allen, Christy Adkins, Elisabeth Akinwale, Stacie Tovar, Val Voboril and Kevin Ogar. Throughout the fall BFB will be conducting their Pink Bra Tour, which will make 10 stops at boxes throughout the country. But any CrossFit affiliate is encouraged to put on their own events to raise money and awareness, and boxes are eagerly accepting the challenge—creating mini-philanthropists all across the world!

There are numerous other foundations and causes that have grown out of the passions and stories of CrossFitter’s. And with the affiliate community rapidly growing each month (there are currently more than 10,000 boxes worldwide), there is bound to be plenty of support to ensure that they too can continue to flourish. So next time you’re feeling down or burnt out from CrossFit, just remember that you are part of something that transcends the walls of your box. You can have an impact on other people that are suffering around the world, and CrossFit provides you a way to do that. The opportunities are all around you, even if you want to start a foundation yourself. We should all feel proud to be part of a sport/community/lifestyle that is so supportive of one another, and we should each do our part to ensure that this core practice of CrossFit never dies.