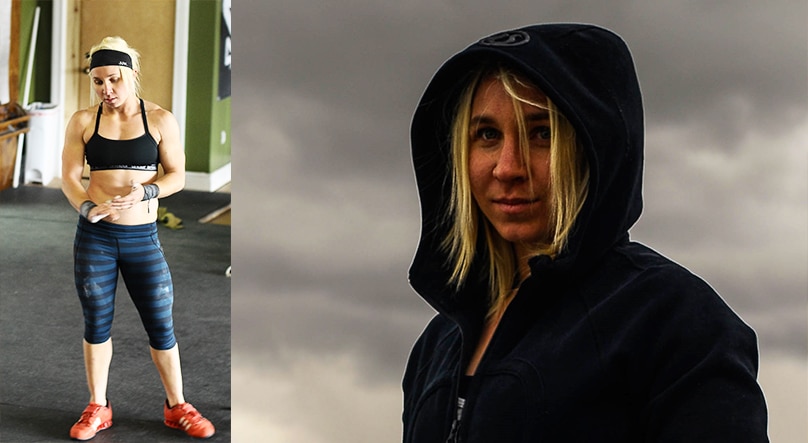 She’s a trusted gymnastics coach; though she’s never been in gymnastics.

She has worked as a licensed welder and sawyer.

She’s been a competitive motocross racer.

Impressed yet? You will be.

After spending the first 13 years of her life in Simi Valley, Natalie traded California beaches for the snow covered Rockies of Boulder, CO. She initially tried cross country and soccer – but after her sophomore year decided to make another transition, swapping organized sports for “free-style stuff”, as she put it. The winters were for snowboarding, summers for skateboarding, and time in between spent at concerts of NOFX, Rancid, Face to Face, and other punk bands. In other words, she wasn’t your typical girl next door.

“I was an outsider. There weren’t very many girls that were like me. Most of the time I was alone or hanging out with guys. But that was my personality. I always tried to be independent. I even learned how to be somewhat of a mechanic. I never wanted to be the girl that couldn’t take care of herself so I tried to learn as much as I could about working on engines and such. When my car would break down I would fix it myself.”

After high school Natalie committed to Colorado Mountain College (Leadville, CO). She majored in Environmental Science, a degree she used as a field technician for the USGS to meticulously calculate stream characteristics in the wilderness of the Rockies. The job was somewhat a reflection of Natalie herself – unique. Most of the time she was working alone in rather perilous situations; wading in chest-deep, high-flow rivers trying to gather data… all the while protecting expensive equipment and doing her best to keep a foothold on the river bottom. Other days would consist of carrying 70-pound nitrogen tanks through mountains, working with concrete and iron to build surveying tools, or clearing heavy brush for a worksite. As if this wasn’t enough, she used her “down time” for hiking, rock-climbing, kayaking, dirt biking, 4-wheeling, or playing frisbee golf.

And then one day IT happened. She found the one thing that links you, me, and countless others worldwide.

“One day I was at a rock climbing gym and I got a chance to try CrossFit. I had heard of it but I didn’t know anything about it. My first workout was a 10-minute Cindy… and I loved it. I asked to join that day and my life has been different ever since!”

Apparently Natalie REALLY enjoyed CrossFit. Less than a year after her introductory WOD she decided to make the move that many of us only dream of. She quit her job, moved to the one place she’d always wanted to return to, and partnered up with two others in opening a CrossFit box (CrossFit Vail). That decision, she says, was invaluable to her happiness and athletic progress.

“Opening the gym made a huge difference for me. While working for the USGS I was constantly trying to fit time in for CrossFit. I really started to see gains when I was able to train full time. I don’t know how people do it with full time jobs.”

Apparently these “gains” were significant. The Granite Games, WODAPALOOZA, the Outlaw Open, the Colorado Open, and The CrossFit Games are just a few of the battlegrounds in her competitive repertoire. In other words, and at the risk of sounding a bit informal, the woman is a legitimate bad-ass.

Unfortunately an injury put Natalie out of contention for the 2014 Open.

“Just two weeks before 14.1 I slipped two discs in by back. It was very hard (to deal with) and I was very depressed. I had some really bad days. But I realized that when I recover I’ll have longer to train for next year. One goal of mine is to make it back to The Games and improve my standing. I’m also hoping for an opportunity in the NPFL – that would be amazing.”

When I was interviewing Natalie it was obvious that even talking about her back injury was difficult. Her experience at the 2013 Games had left her with a hunger for “redemption” that few can understand… and not being able to contend for the 2014 season made it that much more difficult. The emotional scar seemed far more damaging than anything physical. As I listened to her story I couldn’t help but be amazed by her passion. “What exactly motivates you to push so hard and sacrifice so much?”, I asked. Her answer was nothing short of inspiring.

“I have a commitment and dedication that even I don’t understand. I guess it’s because CrossFit has given me so much. I never played college sports like most of the other girls and I often workout alone. My size (5’1″, 120 lbs) doesn’t exactly play to my favor either – but I’m not afraid. People are always asking for my ‘secret’, so here it is.  It’s the belief that I can do anything through hard work. I’m confident that I have what it takes and I’m motivated by success. There’s honestly nothing I love more than the feeling of accomplishment after a long, grueling battle to get to the top. I am absolutely dedicated to my journey back to the Games and I know I can do it. I do feel like I struggle sometimes… but that’s all part of the battle. The hardest part is over though – and I know what it takes to get to the Games. Now I’ve just got do it again, but better.”

** A few days after our interview Natalie got a chance for “redemption” by competing at the NPGL combine in Las Vegas. How’d she do? She finished on the winning team and ended up getting picked up by the Boston Iron in the first round! Natalie, we wish you well – and look forward to seeing you succeed in the National Professional Grid League! For those of you near Massachusetts, you can watch Natalie and the Boston Iron take on Jenn Jones and the Miami Surge this Sunday (24th) at 2:00pm in the Tsongas Center.

Patrick Vellner On Training, Managing Time, & His Advice For the Community. Plus, Two Sample Training Days!