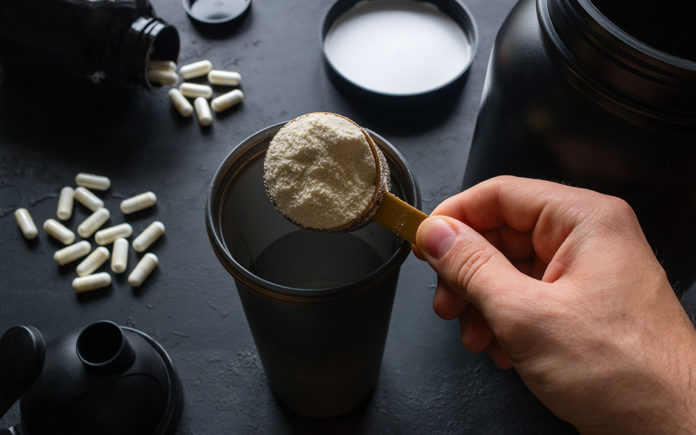 While most of us are lucky to count our macros or calories consistently, CrossFit athletes must be hyperaware of everything passing their lips. The smallest fraction of any CrossFit-banned substance could be the difference between a title and a tainted victory. CrossFit HQ has left no doubt that they are taking banned substances seriously: 2017 third-place finisher Ricky Garard received a four-year ban and a stripped title after testing positive for Testolone and Endurobol. 2018 Master’s second-place finisher and former champion Shawn Ramirez also received a four-year ban for Ostarine. Both claimed they thought the supplements they were taking were clean.

In a heartfelt Instagram post after CrossFit announced his ban, Ramirez said, “When CF notified me that I tested positive for GW1516 and Ostarine, I was floored! I have been in constant communication with CF and was really taken back when they released the findings. The amounts they found were so small 0.02 ng/ml (20 trillionths of a gram) and 0.3ng/ml, which were provided by CrossFit upon request. The only thing that makes any sense is that there was a contaminated substance that I was taking.”

Can Substances Be Contaminated?
So – can a supplement indeed be contaminated? And, if so, would it be enough to show up in a testing sample?

“Supplements can be contaminated. Definitely,” said Walter Hinchman, CEO of Swolverine Supplements. “That’s something that can definitely happen if they’re not third-party tested, and they don’t get batch analysis done.”

In fact, that’s exactly what happened in the case of Kelli Holm, whose failed drug test was announced at the same time as Ramirez’s – and with the same substance, 0.02ng/mL of a metabolite of GW1516. Holm initially received the same four-year ban, but CrossFit reduced the ban to two years after Holm proved in the appeals process that the pre-workout she was taking was contaminated.

The Blame Game
So, in the case of contaminated substances – which can exist – does the burden of responsibility fall on the supplement company or the athlete who chooses to take the substance? In Holm’s case, CrossFit pointed the finger at her for not doing her homework.

“Crossfit has acknowledged that the supplement was indeed contaminated, however, because this product was not third-party tested, they are holding me responsible for ingesting the unlisted ingredient,” Holm said on her Instagram account.

Hinchman mentioned that a trusted supplement company shouldn’t be hard to find if you do a little digging.

“I guess just the biggest thing that athletes can do… is use the products that don’t have (proprietary) blends, that you know exactly what’s in them,” Hinchman said. “Those are things that you need to kind of take upon yourself and have the responsibility for and take an active interest in your own health and what you’re buying.”
Okay, So Let’s Separate the Curds from The Whey

So, what goes into creating a top-notch supplement? When vetting a company or supplement, Hinchman said there are several things a company should have:
Batch analysis testing. For each ingredient in a product, the manufacturer should perform testing that shows the amounts of the ingredient. “Anything that does not pass according to our upper limit standards or parts per million in terms of what we can allow, they will be turned back, and then restarted with that manufacturing process. Fortunately for us, we’ve never had to do that,” Hinchman said. If a product passes, it receives a certificate of analysis.

No proprietary blends. You’ve likely seen the words “proprietary blend” thrown around on products. Sounds good, doesn’t it? Proprietary blend simply means a company’s individual mix of different ingredients – but the amounts of these ingredients could vary wildly. And, often, companies underdose these ingredients. “As an athlete especially, if you’re trying to get to a point where you’re improving your performance, you need to make sure that the products you’re taking are clinically dosed or dosed according to what the research says.”
Bonus: Find the clinical studies. Curious about the effective levels of beta-alanine or citruline malate? It’s likely there have been research studies done on them. Do your homework, check the studies. Swolverine lists such studies on their website to support their ingredients, as do many other trusted companies.
And Don’t Count on The FDA.

The dietary supplement industry is virtually unregulated by the FDA. Federal law requires that every dietary supplement is labeled as such and that if there are terrible adverse effects, a company must report them. According to the FDA website, “For most claims made in the labeling of dietary supplements, the law does not require the manufacturer or seller to prove to FDA’s satisfaction that the claim is accurate or truthful before it appears on the product.”
Comforting, right?

“It would be expensive, but I mean you could go buy all the raw materials, go to your garage and put them in a container, mix it up, put a sticker on it and then go sell it,” Hinchman said. “Until somebody has some type of human toxicity or extreme adverse effect, the FDA will not take notice of that product.”
While those of us who aren’t competing at the highest level may never have to worry about being popped for banned substances, it’s at all levels to do a little chemistry and quality research before investing in our diets and health – especially when it comes to pills and powders.