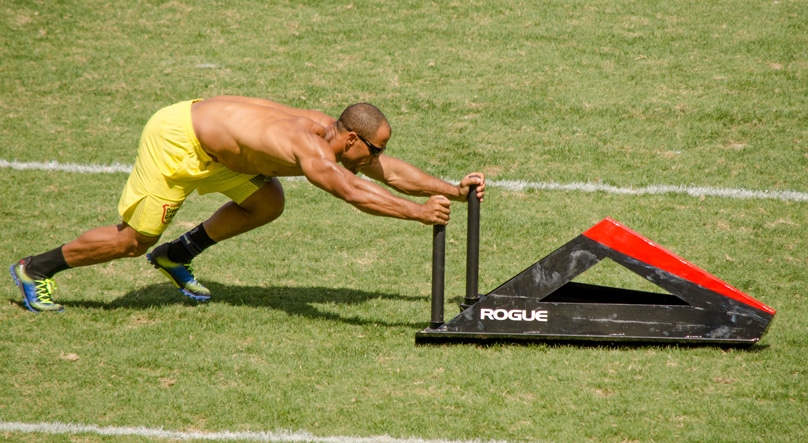 The use of sleds in athletic training is not new, and for good reason. The sled comes in various shapes and sizes (such as the ‘racer sled’ from this years’ Games), which enable a diverse range of exercises to suit the athlete’s needs. They can be pulled, pushed or dragged. In the case of the prowler sled, weight can be added to make the exercise more targeted—whether for power development, muscular endurance or aerobic training. There’s a reason the sled has made an appearance in one form or another at every CrossFit Games since 2011. Its versatility means that it can be programmed into a number of events (or used on its own) to expose an athlete’s weaknesses; by the same token, you won’t see an elite CrossFitter train without one. The sled simply makes you better. But how? First though, a little historybehind the contraption.

Origins and use
The inspiration for sled training can be traced back to the Scandinavian logging industry where loggers had no choice but to drag felled trees out of the forests. From this heavy work, the men developed powerful legs and lower backs, which perhaps explains why Finnish weightlifters are renowned for their deadlifting prowess. It wasn’t long before sled training found its way into athletics—for the sport of bobsledding, in which athletes push a bobsled down an ice track, the transition was seamless. Push sleds are now a common sight in football and rugby training programs, and are also used by sprinters and of course, CrossFitters.

Sleds have evolved over the years and now come in various shapes and sizes. The most common is the prowler sled, which traditionally comes in two designs. One has a sturdy metal plate with an upturned leading edge, the other uses twin parallel runners. Both have one or more vertical posts onto which weights can be loaded and a loop through which towing straps can be attached.

Acceleration is the rate at which velocity changes with time, or the rate at which something speeds up or slows down. Naturally, this is crucial to many sports, which is why sled training is so highly valued. A 2012 study published in the Journal of Strength and Conditioning Research compared the effects of a joint weighted sled training and sprint training program against traditional sprint training over 10 and 30 meter distances using professional rugby union players. The athletes were separated into two groups, with one using traditional sprint training and the other using the combined sled training program. At the end of the study, both training protocols resulted in far quicker 10 meter and 30 meter sprint times. But when compared to baseline times, the sled group produced changes of -2.4% (10 meter) and -2.5% (30 meter), compared to respective changes of -1.1% and -1.2% in the traditional sprint group. When the body routinely has to work against resistance, it has to fire harder with each repetition: in this case, with each step. With repeated use of the sled, it seems an athlete’s nervous system (which controls muscle function) may learn to fire harder all the time (during sprints), and not just after using a weighted sled.

The arms and legs work together to coordinate movement, and keeping a strong core is crucial to keeping the body stable as the limbs exert force on the sled and training surface, which can vary from grass through padded matts to gravel—with each posing different challenges.

Variety
CrossFit is all about constantly varied movements, but that doesn’t mean that work on the barbells and pull-up rig can’t get a little monotonous now and then. What could be a better way to mix up your programming and have a little fun than pulling and pushing a sled around?

Active recovery and injury prevention
One of the most important distinctions between sled exercises and most other types of resistance work is that with sled work there is no eccentric, or negative, part of the movement. For example, when you lower yourself during a squat, you’re performing an eccentric action. The concentric portion occurs when you drive upwards with the weight. You can lower far more weight than you can lift, so this is where most of the muscle damage occurs, which is how muscles become stronger. However, if you want to train frequently or speed up recovery, it isn’t ideal. Since sled training only has a concentric movement, it’s a great way to work your muscles without beating them up too much. But that doesn’t mean sled work is any easier than lifting—anyone who has ever trained or competed with a sled knows that it can be devastating.

Great for conditioning
The practice of pulling and pushing something for time, distance or reps is as true to the core principles of CrossFit and fitness as it gets. If the sled is light, you can try and sprint as hard as you can with the sucker and it will burn. If it’s heavy, there’s no question that your muscular endurance is going to go through the roof after a few sessions of pushing the sled 50 yards.

1. Sled Rows
Face the sled and hold the straps with your arms out in front of you. Load tension on the straps and forcefully pull the sled toward you. Take a few steps back and repeat for reps or distance. This exercise can also be performed with one arm at a time, or with both hands using a rope instead of two straps.

2. Pull-Throughs
This is a favorite for NFL players looking to explode off the line. Grab the sled straps and stand facing away from the sled with the handles held between your legs. Hinge at the hips and bend your knees, load the straps with tension, and explosively extend your hips forward as you pull the sled towards you.

This exercise requires you to attach the sled to your body via a belt or vest. Drop onto your hands and feet (ala bear crawl style) and maintain a neutral spine position. Crawl for distance or time.

4. Sled sprints
Using a prowler sled (or a ‘racer sled’ if you’re lucky enough to get your hands on one), place your hands on the posts and drive forward with your legs and hips as hard as you can. It is more efficient to have your arms bent and tucked in as you push the sled. Try to remain on the balls of your feet for better balance and power distribution.

5. Prowler squat to row
Whilst holding a pair of straps attached to a prowler sled and maintaining an upright posture in your torso, complete a full-depth squat. As you stand up, extend your hips forward while rowing the prowler towards you. Take a few steps back to remove the slack from the strap and go again.

In conclusion, a sled is such a valuable tool that it should be a staple of every CrossFit box worldwide. Unfortunately, they can be a little expensive, but thankfully there are some smart people out there who have figured out a way to build more inexpensive versions. So now you have no excuse not to start training with a sled!